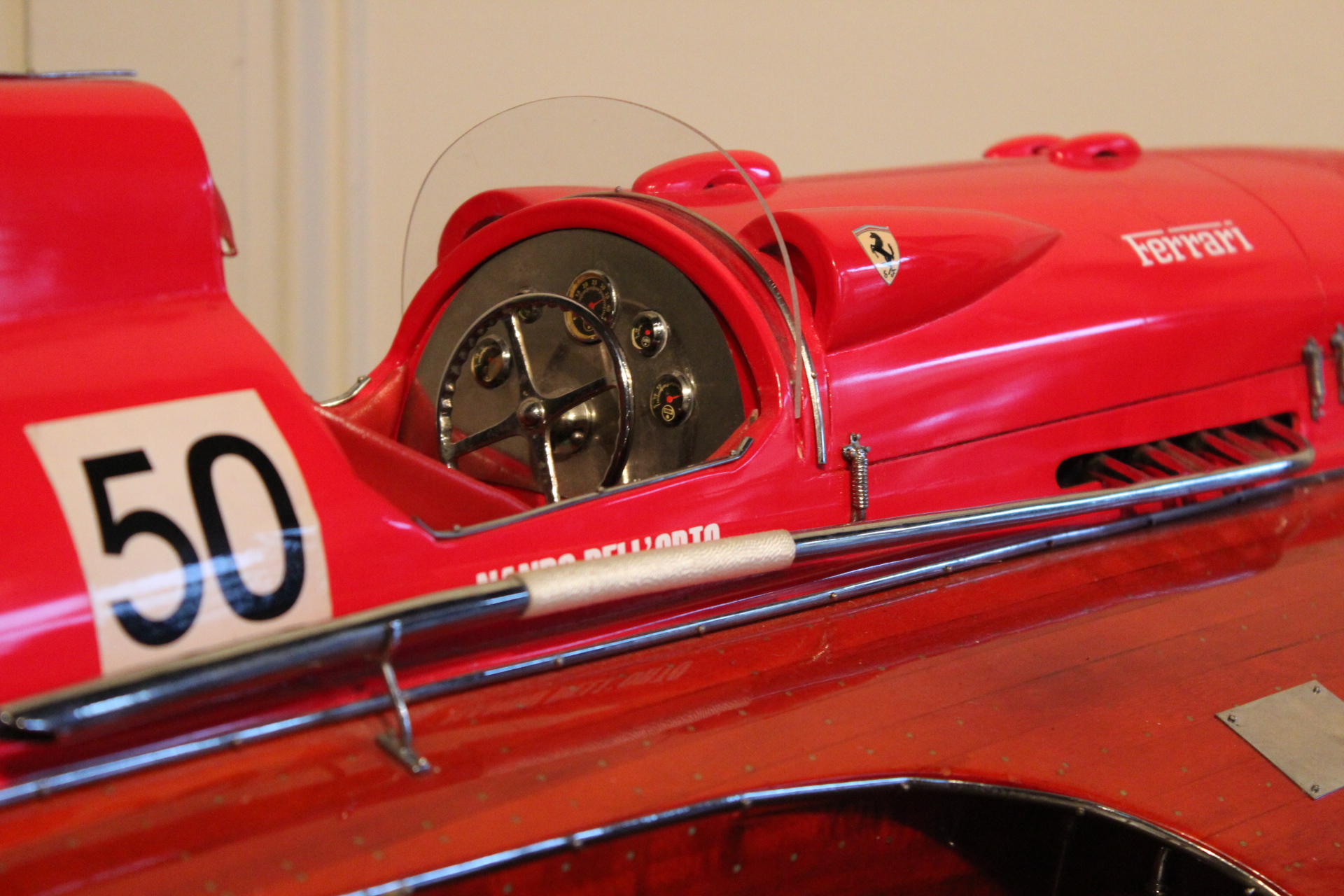 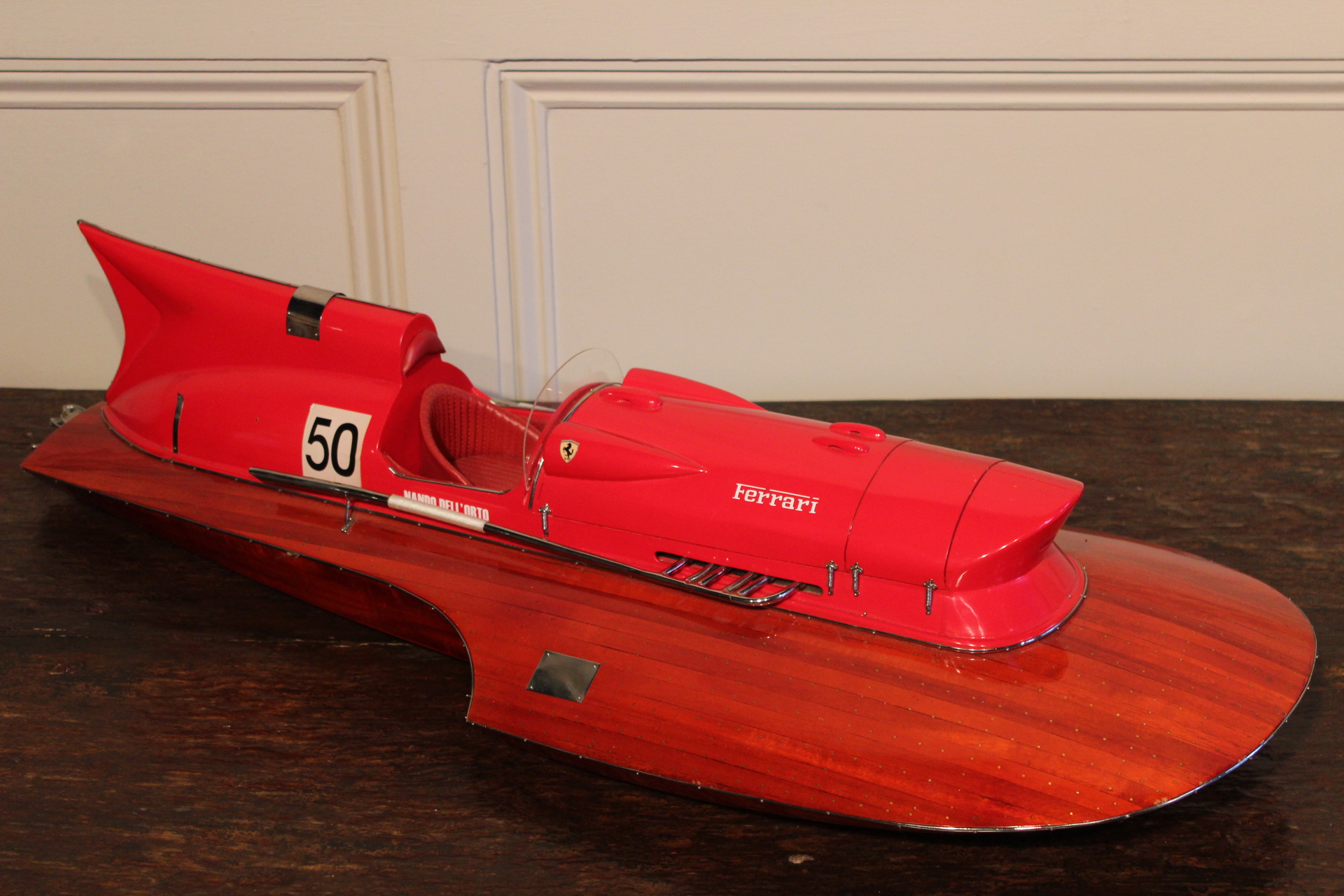 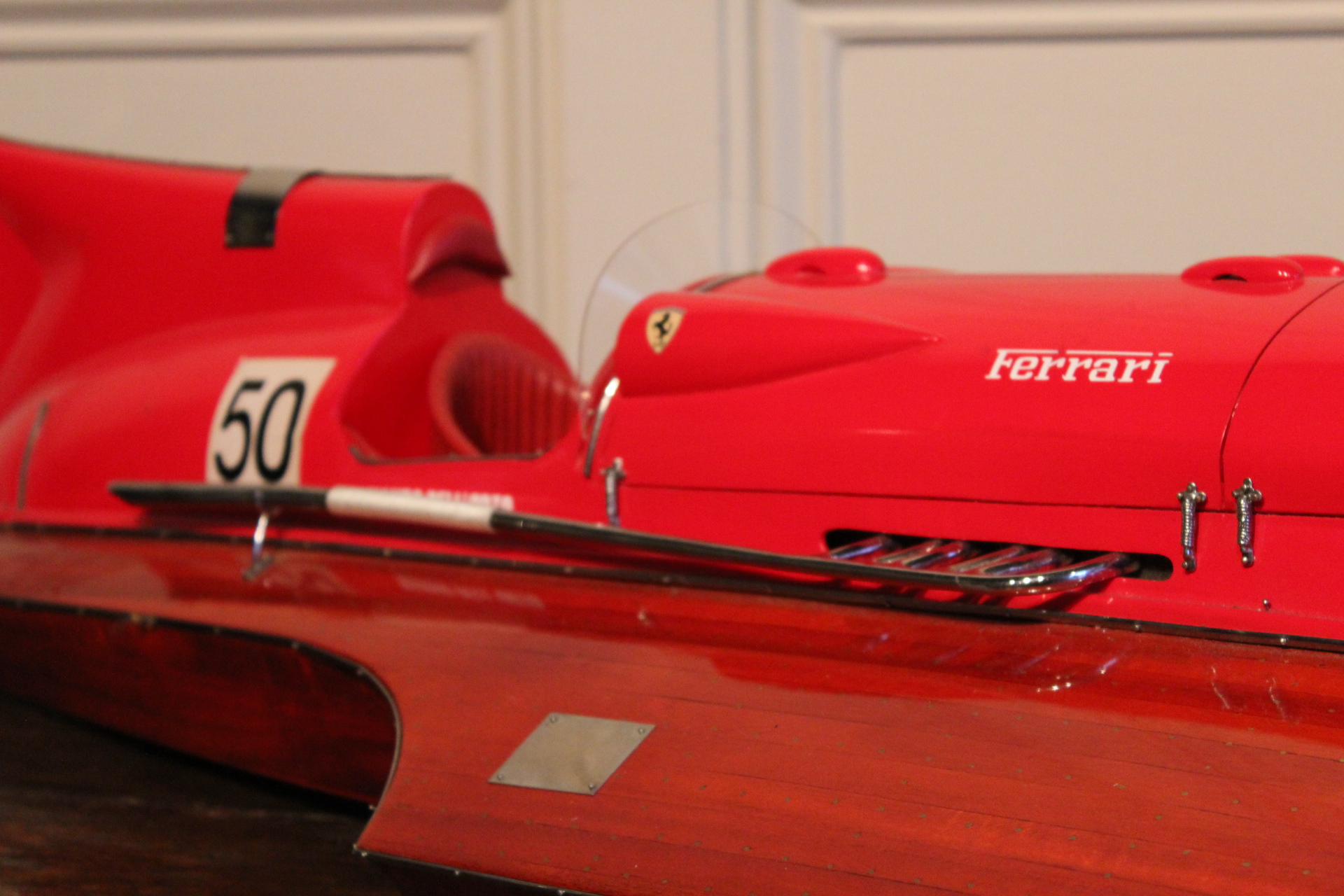 Not quite what you wanted?
Try our Finders Service
Got something similar to sell? Sell to us

Vintage model of a Ferrari Hydroplane 1954. Achille Castoldi was a wealthy boat privateer. In 1940, he set the world speed record of 81.10mph in the 400kg class with his boat Arno. For 1953, Castoldi decided to concentrate on setting top speed records. He commissioned an 800kg-class three-point hydroplane hull. For the engine, he turned to the new up and comers of the auto racing scene – Scuderia Ferrari. Ferrari supplied Castoldi with a type 375 V-12 Grand Prix engine that displaced 4493.7cc, making approximately 385 brake horse power. This engine spun the twin bladed propeller at up to 10,000 rpm!! At the January 1953 Campione d’Italia races, Castoldi piloted Arno XI to an unofficial top speed in excess of 124mph during the shakedown testing, prior to the official two-way run. However, his rival, Mario Verga achieved a speed record of 125.68mph. Two weeks later, he surpassed his own record with a two-way top speed of 140.74mph. In preparation for another attempt at breaking Verga’s new record, Castoldi had a new engine built. Arno XI’s new methanol burning, twin supercharged 4.5L Ferrari power plant produced 600 brake horse power. Ferrari sent Stefano Meazza, the chief race engineer of the Scuderia, to help prepare the new supercharged engine. Grand Prix champion Alberto Ascari showed support by attending the event. On the morning of October 15, 1953, Achille Castoldi succeeded in smashing the 800kg class speed record with an average “flying kilometer” two-way speed of 150.49 mph. He followed up the performance later that day by setting another record in the “24 nautical miles” event. Castoldi retired from hydroplane racing in 1954. He sold Arno XI to a wealthy engineer named Nando dell’Orto. Dell’Orto revised the body lines of the engine cover and front fairing, added a large fin behind the driver for stability, and raced the boat for a few more years. The most notable success was a 2nd place finish in the 1965 900kg World Championship.

Not quite what you wanted? Try our Finders Service
Got something similar to sell? Sell to us